Home / Blog / 10 Stone and marble sculptures that leave us breathless

As stonemasons, when we admire a sculptural work, we often also question aspects such as the origin of the materials or why they have been chosen over others. Simply because of our profession we can’t help it.

When valuing a sculpture, first of all, we take into account the technical difficulty of execution that is marked by the time in which the work was carried out, the materials used and the technical elements available.

Finally, the influence of the artwork on society, the fixation on the small details and finishes, and above all the ability to take us through the imagination to other worlds are aspects that move us and that we value them very much.
It is almost impossible to list artworks that excite us without leaving us in any. However, we will make an effort to collect some of the most significant ones for us. We hope you like it.

“Moses of San Pietro in Vincoli” by Michelangelo

Michelangelo is one of the most renowned artists in humanity. Symbol of the Renaissance, such was his genius that he triumphed in all the arts he practiced: architecture, painting and, of course, sculpture.

All his works exude a naturalness and perfection out of the ordinary. Among some of his sculptures that leave us speechless, we can’t forget “Pietà”, “David” or “Madonna of Bruges”.

However, if we have to pick just one, we choose “The Moses”, a work located in the church of San Pietro in Vincoli. The sculpture, made of white marble, was made between 1513 and 1515, and it was designed to be part of the tomb of Pope Julius II.

The representation of anger in the features of Moses, the prominence of his veins in arms and legs, the folds of the garment … in short, the fidelity in all the details that compose the figure give us the impression that one moment at another Moses will stand up solemnly and raise his voice.

“The ecstasy of blessed Ludovica Albertoni” by Gian Lorenzo Bernini

Gian Lorenzo Bernini was without any doubt one of the greatest exponents of Baroque art. Many of his works feature dramatic and religious scenes that never leave the viewer indifferent.

“The sleeping hermaphroditus,” “Ecstasy of Saint Teresa,” or “Apollo and Daphne” are representative examples of his magnificence as sculptor.

In this case we want to emphasize the importance of the work “The ecstasy of blessed Ludovica Albertoni”, a creation made between 1671 and 1674. Made mainly of white Carrara marble, it can be found in the church of San Francesco in Ripa, Rome.

The work depicts Ludovica Albertoni, a noble woman from Rome with strong religious convictions and remembered for having mystical visions, prostrate on a mattress in a moment of spiritual communion with God.

The many details of great realism in the features of the woman, the dress and the mattress are not overlooked. Nor does the masterful composition of the work, which uses natural light through two small hidden windows and generates a beam of light from celestial nature. All these aspects make this one a very special creation and hard to forget.

“The three graces” by Antonio Canova

Antonio Canova was a very influential Italian sculptor and one of the greatest figures in neoclassical art. Many of his works, such as the iconic “Eros and Psyche”, are true wonders with impeccable finishes.

Here we will focus on the work “The Three Graces”, of which there are two versions: the first is on display at the Hermitage Museum in St. Petersburg and is carved in veined marble; the second can be found in London and is sculpted in white marble.

The representations of the three elegant female figures are based on a 1799 painting by Canova. The slender lines of the goddesses, united in a single embrace, give off an enormous refinement and beauty that leaves us dazed. 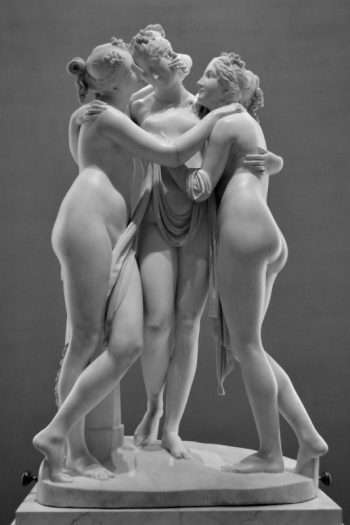 “The veiled Christ” by Giuseppe Sanmartino

Giuseppe Sanmartino had a long and prolific career as a sculptor which was immortalized thanks to this work made in 1753 and currently on display in the Sansevero Chapel in Naples.

The sculpture depicts the lifeless body of Jesus Christ, lying and covered with a very thin transparent veil that covers his entire body. Under the veil one can perfectly perceive the face and the marks generated in the crucifixion.

The finish of the veil is sensational and has been studied later to try to reveal how such a level of perfection was achieved. Either way, we are amazed at the details of this marble sculpture.

“Venus of Willendorf” by unknown author

The oldest and smallest work from this collection dates from the Paleolithic era. The figure, only 11 centimeters tall, represents a woman with very voluminous breasts, abdomen and waist. These features suggest that this limestone figure was a representation of fertility and had probably been used as an amulet.

Given the antiquity of the work, the lack of technical knowledge of the time and the social relevance acquired, this is undoubtedly a sculpture that deserves great admiration. Nowadays, you can find it on display at the Museum of Natural History in Vienna, Austria. 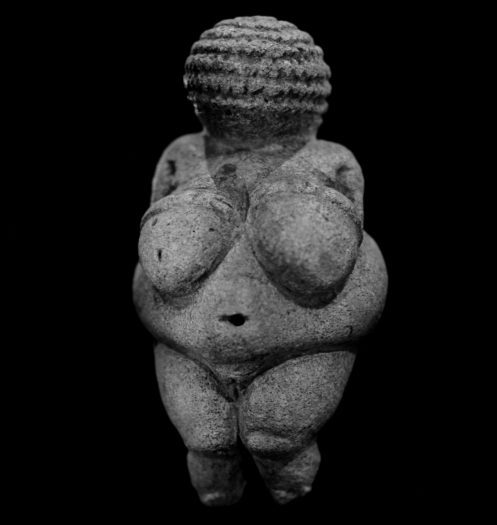 The French sculptor Auguste Rodin is considered the father of modern sculpture, as he moved away from the imitation of nature and gave space to its interpretation. Not a few of his sculptures have become universal icons, such as “The thinker” or “The kiss”. However, in this list we focus on the beauty of the sculpture “Eternal springtime”.

This creation in 1884 became so famous that Rodin created several bronze and marble replicas. The sculpture immediately takes us to a moment of happiness and passion by young lovers who give themselves an eternal kiss. The graceful posture and tension of their bodies make it a masterpiece.

“The night” by Aristides Maillol

“The night” is a bronze statue located in the Tuileries Garden in Paris. It shows a woman sitting, with her knees raised to support the elbows and hide the head in her arms, probably in a reflective or resting attitude.

The work conveys harmony and, despite being a modern sculpture, is reminiscent of the models of Greek sculpture. Precisely the archaic Greek ideas and the search for harmony from nature are characteristic features of the career of Aristides Maillol that are perfectly represented in this statue. 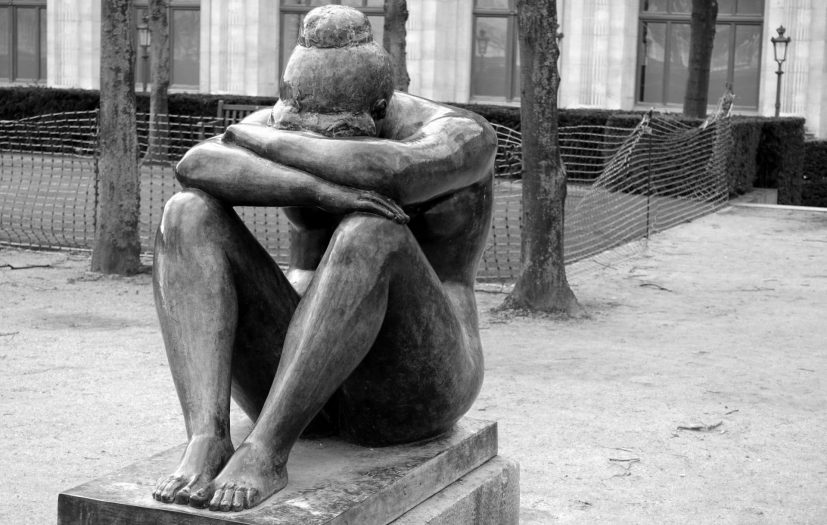 “The goddess” by Josep Clarà

“The goddess” is one of the most outstanding works by Josep Clarà, a Catalan noucentista sculptor. So much so that several copies of this sculpture have been made, it has become an emblem of Barcelona and a copy is preserved in a place as symbolic as Plaça de Catalunya in the same city.

The figure of the goddess is a representation of female beauty and conveys great serenity. The sinuous shape of the woman’s silhouette, her elegant pose and the feeling of calm that emanates from her face offer as a result a very beautiful work. 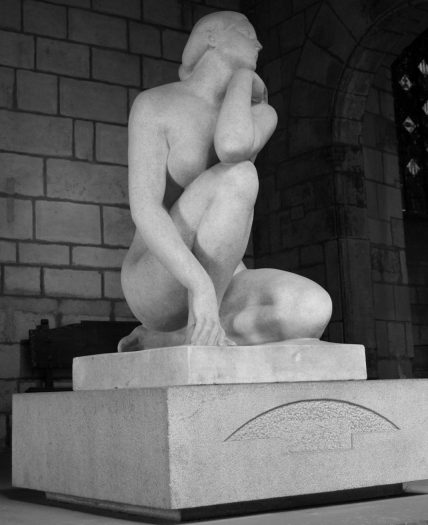 “The grief” by Josep Llimona

“The grief” by Josep Llimona is one of the most emblematic modernist pieces in Catalan sculptural art. The original marble sculpture is preserved in the National Art Museum of Catalonia, although a copy can be found in the Parc de la Ciutadella in Barcelona.

In the work of art we can see a naked, kneeling, half-fallen woman with her face covered by hair. It’s a shocking depiction of a moment of pain. Although we cannot see the face of the female figure, this does not deprive us of stopping for a moment to reflect and empathize in the face of this situation of loss and grief. 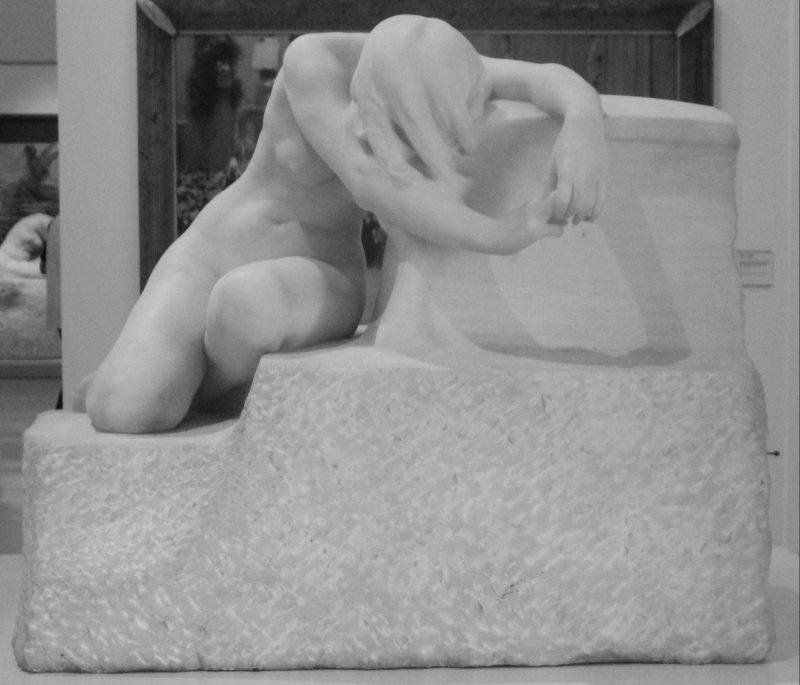 This work of art has a great emotional charge for us as we had the immense pleasure of participating in the different phases of its creation. It is a four meters high sculpture made of Roman travertine and currently located in the apse of the temple of the Sagrada Familia.

The sculpture is dedicated to Sant Antoni Abat, patron saint of animals. This is why with the left hand the figure holds a piglet. The size, solemnity and differential style suggested by the magnificent artist Manuel Cusachs; they still amaze us today. 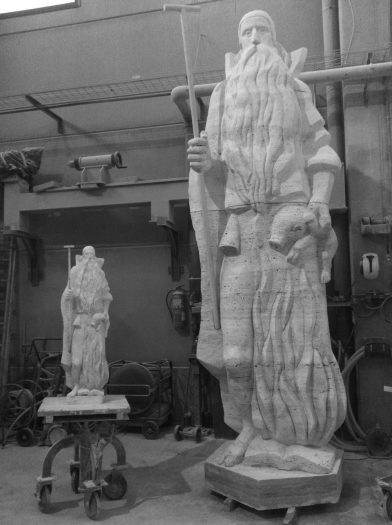 We hope that with this sample you discovered sculptures you didn’t know about and that make you dream. In case you are interested, we also leave you a collection of stone artworks in which we have been lucky enough to participate. If you think we can collaborate or want to contact us for any other reason, you can do so through this form or by phone.

It is almost impossible to list artworks that excite us without leaving us in any. However, we will make an effort to collect some of the most significant ones for us. We hope you like it.

Stonemasons of the Sagrada Familia: a spectacular adventure

All the stone projects that come to our hands have a certain complexity and are exciting to carry out. However, when the project we are talking about is the Sagrada Familia, the magnitudes multiply.