The facade of the Passion is a spectacular representation of the death and resurrection of Jesus Christ. This façade, facing west, despite being austere in nature, contains numerous symbolisms and curiosities that enhance its magnificence.

Gaudí conceived this façade with the idea of ​​transmitting the fear and cruelty of Jesus’ sacrifice. To achieve this he was willing to use various geometric shapes with edges or even to sacrifice the construction, breaking arches or cutting columns, to generate a more gloomy effect.

The sobriety of the façade is manifested by the presence of columns in the shape of bones and takes on greater dimension thanks to the sculptures loaded with drama and expressiveness made by Josep Maria Subirachs.

In this article we will give explanations of the most relevant sculptural elements that make up the façade, as well as a brief review of its history and our participation in the construction.

History of the Passion façade

The projection of this façade began in 1911 while Antoni Gaudí was recovering from a Malta fever in Puigcerdà. However, it was not until six years later that Gaudí drew up the definitive sketch that became a guide for the next generations.

The façade of the Passion began to be built after the death of the architect. Gaudí decided to prioritize the construction of the Nativity façade because he considered it more grateful for the spectator. Thus, it was not until 1954 that excavations began on the façade and from 1956 onwards the first stones were laid.

The four towers on the façade were the first to be completed in 1976. Once completed, the next step was to bring the sculptural decoration of the façade to life. This task was commissioned in 1986 to Josep Maria Subirachs, a renowned sculptor who decided to leave his mark through a simple and schematic set of figures with a powerful dramatic effect. His work took place between 1987 and 2009.

Finally, in 2018, the last sculptures were placed, ending the façade after more than six decades of work.

Sculptural set of the portal of the Passion façade

To grasp the message of Christ’s death and resurrection, it is essential to look at the sculptures located on the portal and proposed by Josep Maria Subirachs. These respect Gaudí’s initial project in general terms, although they adapt to a modern aesthetic as Gaudí left very few details about it. Subirachs avoided creating confusion with Gaudí’s original work and decided to leave his own artistic stamp on it.

The order of the scenes represented on the façade is also an approach by Subirachs, which differs from Gaudí’s original proposal, which sought to follow a rather horizontal format. Finally, the scenes of the Passion are read in an inverted “S” shape, ascending from left to right. They depict the Way of the Calvary of Jesus, from the Holy Supper to the burial, and finally the ascension.

The sculptural cycle of the Passion consists of three levels according to its visual arrangement. We review them below:

Lower level
It contains all the scenes from the last night of Jesus Christ and before his crucifixion. These include:

This level represents the Calvary of Jesus after his judgment and in this case the chronological order of events begins on the right. We find the following sculptures:

The last row of sculptures depicts the death and burial of Jesus Christ. It is read from left to right, as it happened on the lower level. We can see the following scenes represented:

General characteristics of the Passion façade

If we move away from the façade and look up, surely our eyes will go to the imposing towers that stand out in the sky of Barcelona. Each tower on the three facades of the Holy Family represents one of the twelve apostles of Jesus.

The four towers on the façade of the Passion are dedicated to the apostles James the Minor, St. Thomas, St. Philip and St. Bartholomew. All of them are decorated with a large statue, work of Subirachs, which is located at a height of one third of the total length of the towers. The two central towers have a higher height, 112 meters, compared to the two outer ones, which measure 107 meters.

Between the two central towers, at a height of 60 meters, there is a bridge that connects them and that we were lucky enough to work in our workshop. There is a bronze sculpture depicting the ascension of Jesus Christ to heaven: a triumphant moment that contrasts with the drama of the whole facade.

Looking down a little we can see an abstract sculpture of Subirachs inspired by a dove, which symbolizes the Holy Spirit and refers to the resurrection of Christ.

Just below is the pediment formed by a set of eighteen columns, on which is placed a cornice of hexagonal prisms and where you can read the inscription “Iesus Nazarenus Rex Iudæorum”, which means Jesus of Nazareth, king of the Jews”. In the upper central part of the pediment stands a large cross 7.5 meters high. At the foot of it are three angels, sculpted by Lau Feliu, one of them in an attitude of veneration, another caressing the cross and another holding a chalice with the blood of Christ. 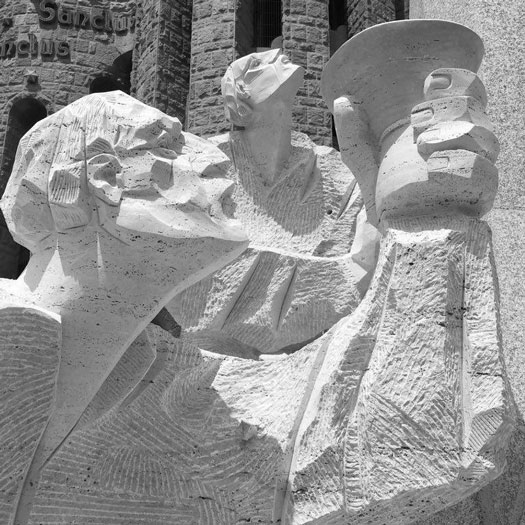 In the two side corners of the pediment there are two animal figures: the lamb of Abraham’s sacrifice and the lion of Judah, the victor over death. Inside the pediment, in the space between the central towers, there is a representation of the quarry where the tomb of Jesus was excavated and which later became an orchard.

The façade is supported by six columns sloping from outside to inside. Between the columns are three bronze portals that give access to the interior of the temple. These are dedicated to Faith, Hope and Charity.

The central portal, that of Charity, is divided into two doors by a mainell where you can see a sign of alpha and omega united, which in Christianity signify the beginning and the end of Creation. The doors contain gospel texts that narrate the last days of Jesus. In front of the portal is a column with the representation of the scourging of Jesus Christ. The column is located on three steps that symbolize the three days that passed until the resurrection.

The portal of the Faith is dedicated to the prayer of Jesus in the garden of the olive trees. We see Jesus praying while his disciples sleep, and in the upper left appears the full moon, as a harbinger of death.

Finally, in the portal of Hope, Jesus appears with the crown of thorns, the mantle and the reed, as a mockery of his condition as king. In another scene, Jesus is led before Herod and Pilate, who appear facing each other symmetrically.

Our contribution to the facade of the Passion

Both the pediment where the Holy Spirit is, the set of 18 columns of the cyma that symbolize the ribs of Christ, the Latin inscription of the pediment, the three angels at the foot of the cross, the bridge that connects the central towers, the orchard of the cyma, like the figures of the lion of Judah and the lamb of Abraham are elements of the Sagrada Familia that we have seen born and raised in our workshop. Every time we look at the Passion façade, we are proud to have been lucky enough to be part of it.

The Sagrada Família project helped us to create the workshop we have today and gave us the technical and economic impetus necessary to be able to work on more ambitious projects. The collaboration on this façade began in 2004, with the production studio, until 2018 with the placement of the angels of the cross.

In this article we review anecdotes from the beginning of the collaboration with the temple of the Sagrada Família. By the way, if you have a stone project in mind, contact us and we will do our best to help you. To give you an idea of ​​what we can do, take a look at some of the many projects we have been involved in.

It is almost impossible to list artworks that excite us without leaving us in any. However, we will make an effort to collect some of the most significant ones for us. We hope you like it.

Stonemasons of the Sagrada Familia: a spectacular adventure

All the stone projects that come to our hands have a certain complexity and are exciting to carry out. However, when the project we are talking about is the Sagrada Familia, the magnitudes multiply.